The Canadian Choice for Pure Honey

The extended period of warm weather has allowed the hives to really expand the brood nests. We have added a second brood box to nearly 75% of the hives to allow them more room to expand. 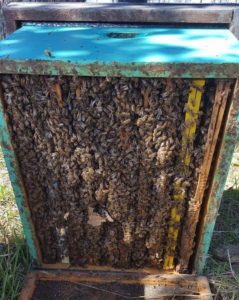 A hive inspected from the bottom, ready for more space

I add a second brood box to hives once they have at least 8 frames covered in bees, when inspected from the bottom. Top inspections tend to be misleading, I have found that what appears as 8 frames from the top is only 5 frames of bees from the bottom.

I add the additional brood box underneath the existing colony. The idea with this is that the bees will work and prepare the cells for the queen more quickly as they have to pass through the empty box to get up to the existing brood nest with each load of honey and pollen. Also, the bees often build a thick barrier of honey at the top of the brood nest. The queen often doesn’t cross this honey barrier, as she is looking for open cells in her existing brood nest. In my experience, adding the second brood box to the bottom speeds up the brood nest expansion by at least a few days, and I would advise it to anyone wanting to expand quickly for splits, it does involve additional lifting though. 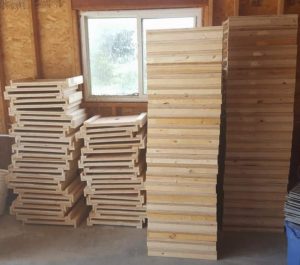 stacks of new equipment ready for paint or wax dipping

We have a bunch of new equipment that we built during the winter, which needs to be painted or wax dipped to protect it from the elements. I have been painting everything thus far but am leaning towards getting this fresh stuff dipped, I have been hearing good things about it, and painting is quite time consuming.

I was going to talk about queen rearing this week, but am still working things out with how I will be setting up my mating nucs, my first round of splits will get a queen cell, but I also plan to use mini mating nucs to be able to add mated queens to freshly made hives in June. This is a new adventure for us, but purchasing queens no longer fits in our budget so we are forced into making our own for our current year expansion. Not that this is a bad thing, as I really believe locally mated queens are better to use than imported.

There are no upcoming events at this time.

FREE SHIPPING ON ORDERS OVER $200 Dismiss