The Canadian Choice for Pure Honey

Today was grafting day! To stimulate the bees to create queens which are easy to move to new hives, we use a process called grafting. This is the first year that I will be relying completely on our own queen rearing success to attempt a target of 150 colonies going into winter. I have played around with it on a small scale in past years, but did not trust myself to be successful on a large scale. The budget made the decision this season, and I am feeling it is for the best. 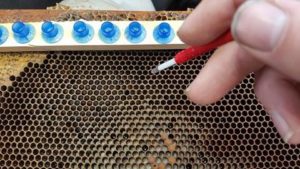 The trick is to pick a strong hive with the traits you want to see in your daughter colonies, the hive I chose overwintered with plenty of stores, low mite counts, no symptoms of brood disease, and was one of the quickest to build up this spring. This brood pattern was the deciding factor: 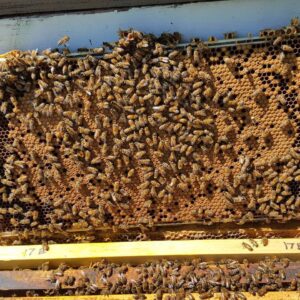 I use a Chinese grafting tool and JZBZ queen cups to graft into. I like the Chinese tool because it has a plunger on it which allows you to gently slide the larva off the tip and into the cell cup.

The youngest larva will be on the outside edges of the brood frame, I try to pick a frame nearly the full of open brood, which also has eggs on the outside edges. This way it is easier to pick the youngest larva for grafting, the goal is to graft larva that are 1 day old. Grafting larva is a bit of an art-form, once you have the technique you can graft quite quickly while still doing a quality job of it, no need to rush, it is the quality ones that will be accepted by the hive and made into queens. I graft in the passenger seat of my truck. I find grafting from a frame that has the top bar on the side closest to your body positions the cells for more successful grafts, with the chines tool you want to insert the tip along the wall of the cell and once you have the tool all the way in the cell and the plastic tip is under the larva, tilt and pull the larva out of the cell, then used the plunger to gently place it into the queen cup. It is hard to explain in words, but once you have the technique you will be successful at it nearly every try.

I ended up making 48 grafts, which is one frame full, 3 bars with 16 cells per bar. Hopefully there will be high acceptance, as the hives are beginning to boom, and will need to be split in the next couple weeks for sure. I want my bees in boxes not swarming into the trees!

There are no upcoming events at this time.

FREE SHIPPING ON ORDERS OVER $200 Dismiss